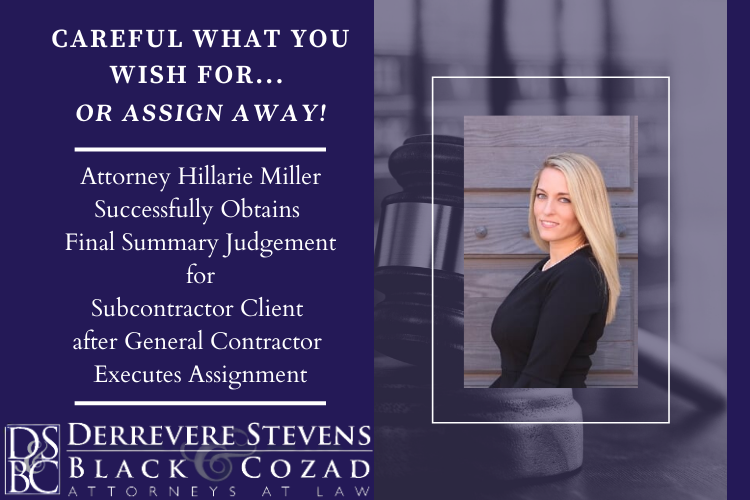 Final Summary Judgment was sought against the General Contractor’s crossclaim on the basis that under Florida law, once a contract has been assigned, the assignor no longer has standing to bring claims for breach of contract or to enforce the terms of the contract. See Lauren Kyle Holdings, Inc. v. Heath-Peterson Constr. Corp., 864 So.2d 55 (Fla. 5th DCA 2003).  The General Contractor argued that because there was no formal document, the assignment of the Subcontracts was incomplete and invalid. However, the Court found that an assignment did, in fact, occur and that there is no requirement under Florida law that an assignment be in writing or meet specific standards of formality to be valid. See Mangum v. Susser, 764 So.2d 653, 655 (Fla. 1st DCA 2000). Rather, in determining whether an assignment has taken place, a court should evaluate whether there was an intention of one party to assign the contract and an intention of the other to receive the assignment.  See Giles v. Sun Bank, N.A., 450 So.2d 258 (Fla. 5th DCA 1984). The General Contractor’s letter notifying the Client of the assignment was evidence of its intent to assign the subcontract and the Owner/Developer’s subsequent invitation to the Client to return to the Project was evidence of its intent to accept the assignment.

To File Arbitration or To File Suit? That is the Question