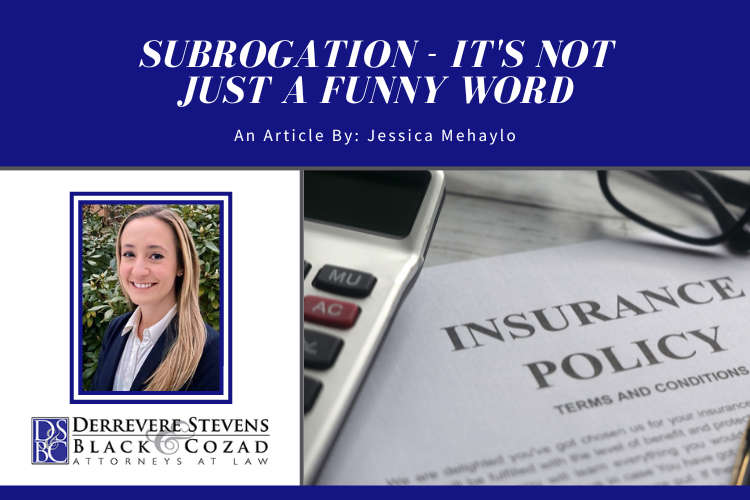 I know what you’re thinking, so first things first, it’s sub·ro·ga·tion (Noun). One more time, sub·ro·ga·tion. I hope we cleared that up because you’re about to read a whole blog post focused on that word, its meaning, its origin, and most importantly, how it applies to you. Let’s start with some basics. Remember, it’s a marathon, not a sprint.

The Oxford Dictionary defines subrogation as “the substitution of one person or group by another in respect of a debt or insurance claim, accompanied by the transfer of any associated rights.” Now, I’ll admit, I’m even confused. So, let’s break this down just like we did with the pronunciation.

First, “the substitution of one person or group by another.” This means the replacement of you or your group.  Replacement? Yes, we’re getting rid of you, in a good way, of course. Your insurance carrier is standing in your place as the party that sustained damages.

That brings us to the next part: “in respect of a debt or insurance claim.”  When you’ve suffered a personal or property loss, you typically file a claim with your insurance company who, in turn, reimburses you for your losses. Now, instead of you being out monies as the policyholder, your insurance carrier is out monies.

Your insurance carrier is stepping into your shoes, whether comfortable or not. It then has the opportunity of taking on the burden of recovery. This could mean: 1.) they do nothing because there is no viable avenue of recovery; 2.) they send a demand; or 3.) they retain a law firm to engage in litigation. Starting to sound like a deal, right?

Now that we’ve overcome our fear of pronunciation and conquered our understanding, let’s take a step backward and explore its origin.

“Subrogation” stems from the Latin word “subrogate,” which means to “put in place of another or to substitute.” 1  In subrogation, the party whose debt has been paid (i.e., the insured), is known as the “subrogor,” and the party who has paid the debt (i.e., insurance company), is known as the subrogee. The insurance carrier, as the subrogee, steps into the shoes of the insured and becomes the subrogor, and acquires all legal rights.

Subrogation is one of the oldest legal concepts in jurisprudence, rooted in Roman law and dating all the way back to A.D. 177- A.D. 138. It was under Emperor Hadrian (famous for the big wall he built) that established the building blocks (insert joke) for subrogation.

Subrogation originates from the Roman law of suretyship. Suretyship established the concept that someone could assume direct liability for another’s obligation. It further established that someone assuming another’s obligation “had the right, upon paying the debt, to have the benefit of the prerogative process…to aid them in coercing payment from the principal,” being the person primarily liable.2  Subrogation, like suretyship, is a formal engagement where one-party pledges to become legally liable for a debt.  Sound familiar?

By 1782, common law courts accepted the Doctrine of Subrogation and by the nineteenth century “the word subrogation had become irrefutably established in the English legal system.”3

Subrogation came to America in the civil war era, at which time, the Courts of Chancery established both the term and the Doctrine of Subrogation. Having been formally established in Article 9 of the Magna Carta, the right of subrogation provided that:

Essentially, the doctrine of subrogation transferred from England to America as part of Anglo-Saxon law and equity.4

Today, subrogation is typically recognized in insurance settings, having wide-ranging benefits to society. For example, subrogation “is a key mechanism by which insurance premiums are kept in check and held to a minimum.”5  The law limits the first-party insurer’s subrogation interest to the amount of “benefits that the first-party insurer actually provides to the insured.”6  To that point, the law limits what an insurance carrier can recover, only allowing insurers to recoup what it pays or promises to pay. The law then permits insurers to assert a claim against the at-fault party to recover any amount it has paid or promised to pay.  Insurers utilize this anticipated or acquired recovery as income and apply “it to cover a portion of their costs for providing coverage.”7  “Insurers will thus pass any increases in their income from subrogation through to their insureds in the form of lower premiums or outright rebates.”8 Evidence available to us, in addition to court decisions across the country, “suggest that the pass-through benefits of subrogation have a meaningful effect on rates.”9

Subrogation is a product of justice. It is the institution of fairness between parties securing the discharge of a debt by having the at-fault party pay for it. Subrogation enables reimbursement for millions of Americans annually and provides important societal benefits.