No Res Ipsa Loquitor for You: DSB&C Secures Another Dismissal for Target 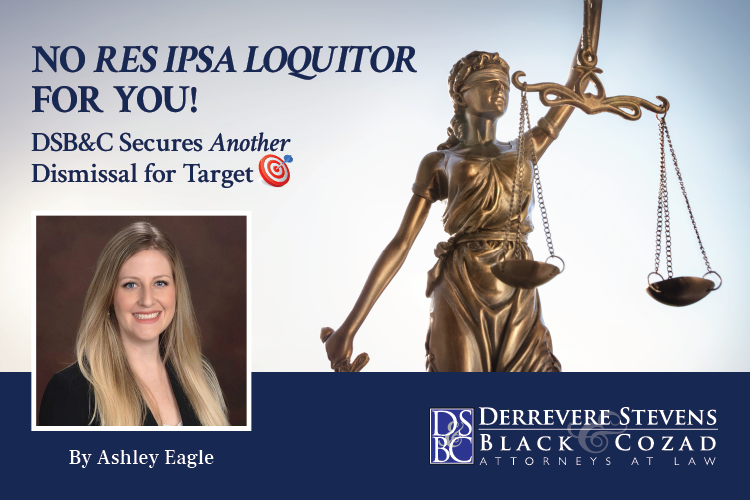 I. BACKGROUND OF CASE

In Urena v. Target Corp., Plaintiffs, as parents and natural guardians of their minor child, claimed their daughter sustained physical injuries when she struck an end cap in Target’s Palm Beach Lakes store while shopping with her mother and grandmother. Plaintiffs filed their Complaint alleging Target failed to maintain the premises in a reasonably safe condition, that Target knew or should have known of the dangerous condition, and that Target failed to warn the minor of the dangerous condition. Target denied liability and asserted that the end cap was not dangerous and was open and obvious. The depositions of the mother and grandmother revealed neither witnessed the incident nor could identify the portion of the endcap which the minor struck.

In response to Target’s Motion for Final Summary Judgment, Plaintiffs attempted to argue the doctrine of res ipsa loquitor to support their claims.

The key differences about Florida’s adoption of the federal summary judgment standard are as follows:

In ruling on Target’s Motion for Final Summary Judgment, the Court cited that under Federal Rule of Civil Procedure 56, if the moving party demonstrates that there is no genuine dispute as to the material facts, the burden shifts to the non-moving party to come forward with specific facts showing that there is a genuine issue for trial. Shaw v. City of Selma, 884 F. 3d 1993 (11th Cir. 2018). Conclusory allegations are insufficient to create a genuine issue of material fact.

After a review of the record evidence, pleadings, and deposition testimony, the Trial Court determined there was no admissible evidence that the end cap which the minor struck was materially different from other end caps at the Target store, nor that any other person was ever injured by striking an end cap. The Trial Court further concluded that the end cap was both open and obvious and not inherently dangerous.

The Trial Court rejected Plaintiffs’ argument that res ipsa loquitor applied since the minor’s action in striking the end cap was the cause of her injury, the incident occurred in the absence of negligence of Target, and the end cap was available for inspection by Plaintiffs.

This matter is not final, and is subject to change, until the expiration of the relevant periods for any motion for rehearing and/or time for appeal has concluded. Click here to read the court’s ruling.